"Made in Saxony": The Dutch Royal Couple Visits SpinLab – The HHL Accelerator

The agenda of the four-day trip through Thuringia, Saxony and Saxony-Anhalt of the Dutch Royal couple Willem-Alexander and Máxima included today’s visit to SpinLab – The HHL Accelerator at Spinnerei, a former cotton mill. Alongside cultural aspects and remembrance, the occasion for the royal visit to Germany is to intensify trade and investment relations as well as to promote cooperation between the key industries of the two countries.

The royal guests met young, innovative entrepreneurs from Saxony and the Netherlands at the start-up accelerator SpinLab, run by Germany's leading business school. Rainer Gläß, Chairman of the Board of the publicly-traded technology company GK-Software AG, provided valuable insight into entrepreneurship "Made in Saxony" and primary references to the Netherlands as an important commercial partner. 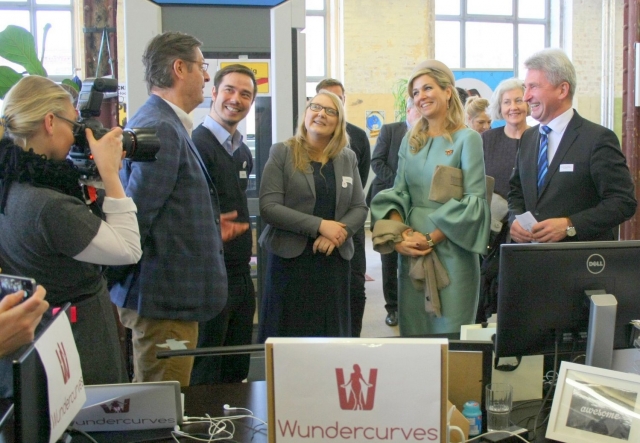 The Netherlands as a start-up pioneer in Europe

Stanislaw Tillich (CDU), the Prime Minister of Saxony emphasized, "Just like the Netherlands, Saxony can look back on centuries of innovative capacity and an entrepreneurial spirit. Leipzig was and is one of the flagships of the Saxon success story." The Netherlands rank at the top in Europe for their friendly conditions for start-ups. Approximately 200 start-ups are founded there every year, five to ten percent of which can establish themselves long-term on the market, thanks to their technology-savvy consumers and their strong digital infrastructure. Amsterdam has established itself as a start-up hub, also with the help of national funding programs and local but internationally acting accelerators.

Start-ups in the digital economy have become the lion's share in both countries: WeTransfer, Fintech Ayden, or Blendle, which dared enter the German market as an initial expansion stage, are all prime examples of this industry in the kingdom. Zalando, Researchgate, or Trivago, which was founded by HHL graduates, are all renowned start-ups in the Germany start-up scene.

In addition to financial assistance from both national and foreign investors and state subsidies, crowdfunding is becoming more and more popular as an external financial source in the Netherlands. In Germany, however, alongside one's own savings, support by the national government as well as friends, family and business angels are the main source of financing. 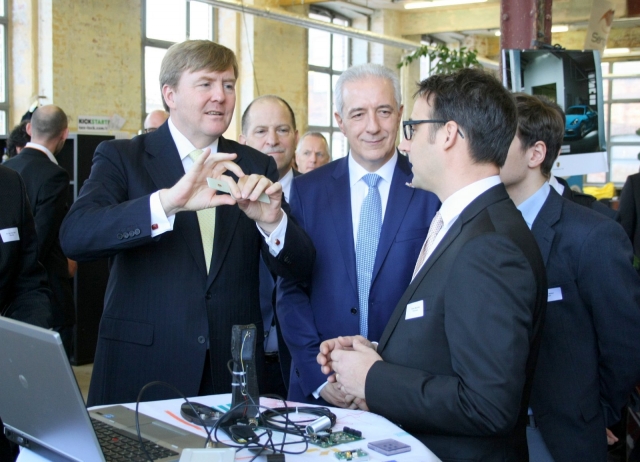 Overall, the willingness to take on risks is higher and the fear of failure lower in the Netherlands than with German founders. Due to the smaller size of their country, young Dutch entrepreneurs are pushing harder for the internationalization of their start-ups. What the two neighboring countries have in common, however, is the biggest hurdle for a start-up: financing. Thanks to a similar legal situation within the European Union, there are no legal barriers for young entrepreneurs to found a start-up in the other respective country.

Isabel Brouwer, leader of the Dutch start-up platform DutchBasecamp, who accompanied the Royal couple on their visit to SpinLab, said, "Dutch founders can help the German ones and vice versa. We also have some excellent German mentors in our Dutch network. Insight into networks, the market launch of their product in a new environment, and insight into financing are essential for start-ups that want to grow internationally."

Leipzig establishes itself as a prospering start-up location

Saxony again gained in importance as a location for founders in 2016, and has, along with the Saxon capital, become the most important location in the Eastern federal states. Leipzig with SpinLab – The HHL Accelerator and the co-working space provider Basislager has, along with Dresden, made a name for itself beyond national borders as the new, secret creative capital in eastern Germany.
The growing number of students, well-renowned research institutes, the trade fair and other factors all contribute to Leipzig's international, open and urban flair. The challenge of lacking big corporations and therefore lacking capital in the region is mainly compensated through public funding. Young entrepreneurs appreciate the relaxed, down-to-earth and creative side of Leipzig.

Dr. Eric Weber, CEO and co-founder of SpinLab – The HHL Accelerator, said, "The development in Leipzig in the last few years has been very positive, and start-ups, not only from the region but from all over Germany, have settled here. We are proud to be a part of that dynamic development and try to draw the attention of international investors to the region with our work. We are therefore very pleased to welcome investors from all over Germany and the Netherlands in addition to the royal couple and the Saxon Prime Minister."
SpinLab – The HHL Accelerator as an independent program is special within the accelerator scene in its ability to offer all services free of charge and without investment to founders. To the contrary: all participants receive subsidies amounting to EUR 6,000 from the City of Leipzig. The program is financed through well-renowned partners from the economy, media and politics. Therefore, the Accelerator has, despite its independence, a wide network within the industry and potential investors. In addition, several software and cloud solutions can be used free of charge.

About SpinLab – The HHL Accelerator

SpinLab – The HHL Accelerator supports innovative founding projects with the implementation and growth of their ventures. In addition to intensive coaching, the founding teams will also benefit from a high-caliber mentoring program as well as numerous contacts to investors, established companies and other founders. They can use a co-working office with state-of-the art equipment on the premises of Spinnerei, an old cotton mill now serving as a center for creativity, and will gain access to various technologies offered by partners.
Even after completing the program, the startup teams are supported in their recruiting efforts, they can plan their expansion through an international exchange program and they get the opportunity to rent office space next to SpinLab. The founders will be able to use all offers free of charge when they are accepted for the six-month program.
The accelerator is funded through contributions from investors and established companies such as Deutsche Postbank, Porsche, CMS Hasche Sigle, Deutsche Bank, Doberman Ventures, DZ Bank, ergo Versicherungen, Grazia Equity, Heinz Dürr Invest, High-Tech Gründerfonds, KPMG, Madsack Mediengruppe, Mittelständische Beteiligungsgesellschaft Sachsen, Quarton International, the City of Leipzig taskforce – Management on Demand and Technologiegründerfonds Sachsen. Thanks to a collaboration with the City of Leipzig, each team receives EUR 6,000 in start-up funds. http://www.spinlab.co

With over 165 start-ups established by HHL alumni over the past 18 years, HHL Leipzig Graduate School of Management has developed into an incubator for company creation. The founders' entrepreneurial commitment has created more than 2,800 jobs already. In 2013 and 2014, HHL reached one of three first places as the best entrepreneurial universities in Germany in the Start-Up Radar ranking published by Stifterverband für die Deutsche Wissenschaft (Founders' Association of German Science) and the German Federal Ministry for Economic Affairs and Energy (BWMi). According to the Financial Times, HHL ranks first in Germany and fifth globally for its entrepreneurship focus within the M.Sc. and EMBA programs. http://www.hhl.de/EntrepreneurialGraduateSchool