Physicists at JMU have now succeeded for the first time in constructing an essential element for such components – a Quantum Point Contact (QPC). They present this achievement in a recent publication in the journal Nature Physics. 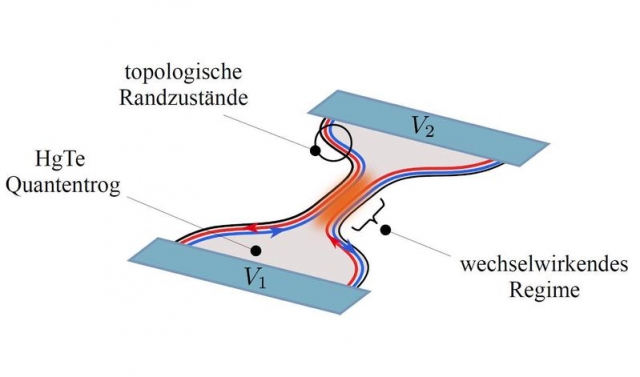 A quantum well narrows in the middle to a quantum point contact. Würzburg physicists have produced this device using new methods of nanostructuring. Picture: Christoph Fleckenstein / University of Wuerzburg

Quantum point contacts are quasi one-dimensional constrictions in otherwise two-dimensional structures that are only a few atomic layers thin. In topological HgTe quantum wells, in which the conducting states are located exclusively at the edges, these edge states are spatially merged at the QPC. This proximity makes it possible to investigate potential interactions between the edge states.

"This experiment could only work because of a breakthrough in our lithographic methods. It has enabled us to create incredibly small structures without damaging the topological material. I am convinced that this technology will enable us to find impressive, novel effects in topological nanostructures in the near future," said Molenkamp.

Using a sophisticated manufacturing process, the JMU physicists have succeeded in structuring the bottleneck particularly precisely and gently. This technological progress allowed them to functionalize the topological properties of the system.

In this context, the team led by Professors Laurens Molenkamp and Björn Trauzettel was able to demonstrate for the first time ever interaction effects between the different topological states of a system using anomalous conductance signatures. The Würzburg researchers attribute this particular behaviour of the analyzed topological QPCs to the physics of one-dimensional electronic systems.

Interacting electrons in one dimension

If electronic correlations are analysed in one spatial dimension, electrons move – unlike in two or three spatial dimensions –in a well-ordered manner because there is no possibility of „overtaking“ the leading electron. Pictorially speaking, the electrons in this case behave like pearls on a chain.

This special property of one-dimensional systems leads to interesting physical phenomena. Trauzettel says: "The interplay of strong Coulomb interaction and spin orbit coupling is rare in nature. I therefore expect this system to yield fundamental discoveries in the coming years".

Topological QPCs are an elementary component for many applications that have been predicted in theory in recent years.

A particularly prominent example of this kind is the possible realization of Majorana fermions, which the Italian physicist Ettore Majorana predicted back in 1937. A promising application potential in connection with topological quantum computers is attributed to these excitations. For this purpose, it is of great importance not only to detect Majorana fermions, but also to be able to control and manipulate them at will. The topological QPC, first implemented at JMU Würzburg, offers an exciting perspective in this respect.

Prof. Dr. Laurens Molenkamp, Institute for Topological Isolators, University of Würzburg, T +49 931 31-84925, This email address is being protected from spambots. You need JavaScript enabled to view it.

Prof. Dr. Björn Trauzettel, Chair of Theoretical Physics IV, University of Würzburg, T +49 931 31-83638, This email address is being protected from spambots. You need JavaScript enabled to view it.