In order to observe cells at work, researchers have to bypass a physical law. One of the fastest techniques to overcome the resolution limit of classical light microscopy is high-resolution structured illumination microscopy. It makes visible details that are about a hundred nanometres in size. However, translating the data back into images has taken a long time so far. A research team from the University of Bielefeld, the Leibniz Institute of Photonic Technology and the Friedrich Schiller University in Jena has now developed a technique to observe processes in the cell. The results were published in "Nature Communications" on September 20, 2019.

This graphics card normally helps computer gamers to have a great gaming experience. The researchers, however, use it to observe the smallest cell components in action — in real time and with a very high frame rate. "The image data can be reconstructed about twenty times faster than it would take on a PC," explains Rainer Heintzmann of the Leibniz Institute of Photonic Technology (Leibniz IPHT), who laid the foundations for the process of structured illumination in high-resolution microscopy back in 1998. Together with him, the Bielefeld research team led by Prof. Thomas Huser further expanded the technology of Super-Resolved Structured Illumination Microscopy (SR-SIM). 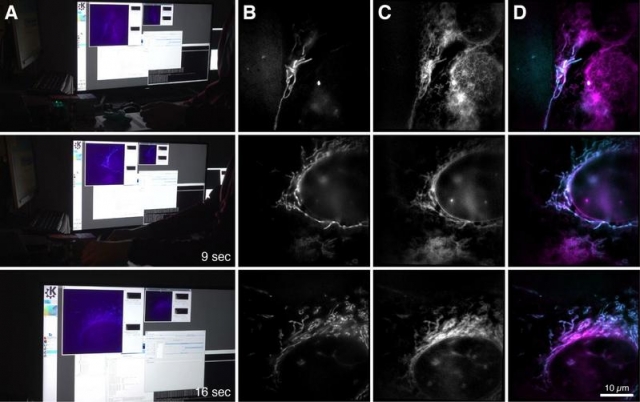 In the fluorescence microscopic method SR-SIM, objects are irradiated with laser light using a special pattern. It excites special fluorescent molecules in the sample so that they emit light at a different wavelength. The microscopic image then shows this emitted light. It is first recorded in several individual images and then reconstructed as a high-resolution image on a computer. "The second step in particular has taken a lot of time so far," says Andreas Markwirth from the University of Bielefeld, the first author of the study. By using parallel computing methods on modern graphics cards for the new microscope, his team of researchers has now been able to significantly accelerate the image reconstruction process. A minimum delay of 250 milliseconds is almost imperceptible to the human eye. The raw data can also be generated more quickly with the newly researched microscope.

Structures that are invisible to conventional microscopes

"This makes it possible to measure samples quickly and adapt test conditions immediately during an experiment instead of evaluating them afterwards," says Rainer Heintzmann, describing the practical benefits of the new technology.

The scientists tested the method on biological cells and recorded the movements of mitochondria, the energy centres of the cells that are about one micrometer in size. "We were able to produce about 60 frames per second — a higher frame rate than those of motion pictures. The time between measurement and image is less than 250 milliseconds, which is why the technology allows real-time recordings," says Andreas Markwirth.

So far, superresolution images have often been combined with conventional methods: A conventional fast microscope is used to first find structures. These structures can then be examined in detail using a superresolution microscope. "However, some structures are so small that they cannot be found with conventional microscopes, for example special pores in liver cells. Our method is both high-resolution and fast, which enables biologists to investigate such structures," said Thomas Huser. Another application for the new microscope is the investigation of viral particles on their way through the cell. "This enables us to understand exactly what happens during infection processes," said Huser.

Superresolution microscopes have only been available for about 20 years. Ernst Abbe discovered in 1873 that the resolution of an optical system for visible light is limited to about 250 nanometres. In recent years, however, several optical methods have been developed in order to fall below Abbe's resolution limit. The Americans William E. Moerner and Eric Betzig, as well as the German Stefan Hell, were awarded the Nobel Prize in Chemistry in 2014 for developing a superresolution in the range of about 20 to 30 nanometers.

http://Press release of the Bielefeld University on this topic: https://ekvv.uni-bielefeld.de/blog/pressemitteilungen/