Wireless Microengine Made from a Twisted Fibre

A highly efficient, micro-sized motor-cum-energy storage system has been presented by researchers from the Helmholtz-Zentrum Geesthacht (HZG) and the University of Bordeaux in the journal ‘Science’. The ‘microengine’ is made from polymeric micro-fibres, which are stiff at room temperature. When heated, the fibres become elastic and can be twisted – like a model aeroplane powered by a rubber band. Unlike the elastic band, however, when the fibres are cooled, they remain twisted until the microengine is re-heated. The energy stored when the fibres were twisted is released, the movable end begins to turn and the ‘microfiber motor’ can propel objects.

The researchers’ ‘trick’ to storing energy at high density is largely based on stiffening the polymer with miniscule sheets of graphene oxide. The main author, Jinkai Yuan from the University of Bordeaux, explains that “in our experiments graphene oxide turned out to be superior to carbon nanotubes”. The favourable orientation of the nanosheets in the direction of twisting, as well as their own deformation, results in a higher turning-moment for fibres with graphene oxide. 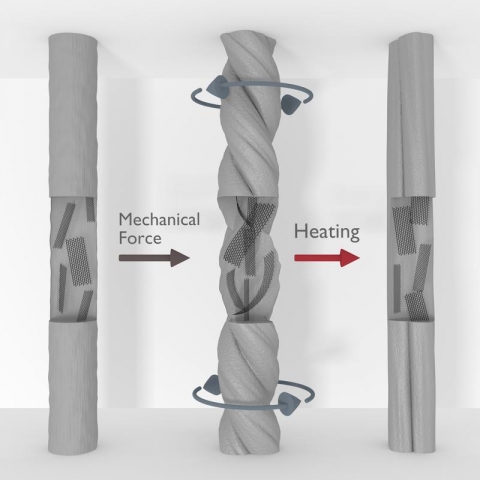 The poly(vinyl alcohol) micro-fibres contain graphene oxide sheets. The nanosheets stiffen the fibres in the direction of movement and enable an energy storage system. HZG/Oliver Gould

Professor Andreas Lendlein, co-author of the ‘Science’ article and head of the HZG Institute of Biomaterial Science in Teltow, expounds: “the number of turns, which can be performed by the microengine, and the temperature range, in which the movement is triggered, can be predetermined.” The so-called ‘switching temperature’, which needs to be exceeded to start the motor, can be set within a wide range. It is mainly determined by the temperature, at which the microfiber was twisted. For the investigated fibre material, poly(vinyl alcohol), a programming temperature of 80 degrees Celsius appeared advantageous. At this temperature over 80% of the turns, programmed by twisting, could be recovered. On the other hand, for future medical applications one could also select a polymer that switches at body temperature.

“These results are an important step towards many applications – such as micro-scale robots or entirely autonomous systems, in which the programming could be carried out with wind energy, for example” according to Andreas Lendlein.

With their easy-to-build motor, the two research teams in Bordeaux and Teltow (near Berlin) fill a gap in the market, as for many applications, an electric motor is too weak, too large, insufficiently robust, and requires electricity and control cables. In previous attempts with fibres, the speed of rotation, turning moment and angle of rotation were too small. Above all, the weight-related energy density left much to be desired. In the micro-fibre motor, however, the energy density is 60 times greater than in natural skeletal muscles.

Head of Institute
Prof. Andreas Lendlein
Institute for Biomaterial Science
Helmholtz-Zentrum Geesthacht
Phone: +49 (0)3328 352-450
Fax: +49 (0)3328 352-452
This email address is being protected from spambots. You need JavaScript enabled to view it.