In 1981, an article by Prof. Adolf Goetzberger titled "Potatoes under the Collector" was published in the German magazine “Sonnenenergie”. The article proposed a particularly favorable setup for solar energy systems in combination with agricultural land use. After smoldering on the backburner for a couple of years, the concept of agrophotovoltaics (APV), that is, the dual usage of land for crop and electricity production, was again taken up by researchers at Fraunhofer ISE in 2011.

Now the scientists at Fraunhofer ISE together with their partners in the project "APV-Resola" are reaping the benefits from Goetzberger’s original article: On September 18, 2016 an operating APV pilot system – the largest research project of its kind in Germany – was inaugurated on location at Lake Constance. On this occasion the project was also presented with a prize from the "Germany – Land of Ideas" initiative.

Over the past decade, Germany has experienced rapid growth in ground-mounted photovoltaic (PV) installations, leading to competition for land between renewable energy producers and farmers. Now researchers at the Fraunhofer Institute for Solar Energy Systems ISE have taken the idea presented by the Institute’s founder Adolf Goetzberger in 1981 and made it a reality together with their project partners: BayWa r. e. renewable enrgy, the energy supplier "Elektrizitätswerke Schönau (EWS)", the Demeter farm community "Hofgemeinschaft Heggelbach", the Institute for Technology Assessment and Systems Analysis (ITAS) of the Karlsruhe Institute for Technology (KIT), the University of Hohenheim, the Regional Association of Lake Constance-Upper Swabia and the local citizens. The innovative APV pilot system demonstrates the resourceful tandem use of acreage, facilitating the production of crops located underneath ground-mounted PV arrays. "In view of the dynamic worldwide growth of photovoltaic installations over the last decade and the resulting increase in land usage for PV systems, innovative concepts, like agrophotovoltaics which facilitates the dual usage of agricultural land, help to further and accelerate the transformation of the global energy system,” says Prof. Dr. Eicke R. Weber, Institute Director at Fraunhofer ISE.

In March 2015, the APV project group began work on the installation in the Lake Constance-Upper Swabian region, after performing numerous investigations, modeling and simulation research. The APV pilot system is installed and operates on land belonging to the organic farming community “Hofgemeinschaft Heggelbach”. Two and a half hectares were delegated for this purpose. The APV system takes up about one third hectare. Beneath the PV modules, which tower five meters above the ground, four different crops were planted for the project duration: wheat, trefoil, potatoes and celeriac. Next to the APV system, the project team planted the same crops over an equivalent area (without PV modules) as a reference. The scientists use this direct reference to determine which type of vegetables or crops are particularly suitable for use with APV installations, that is, the most efficient coupling strategy. 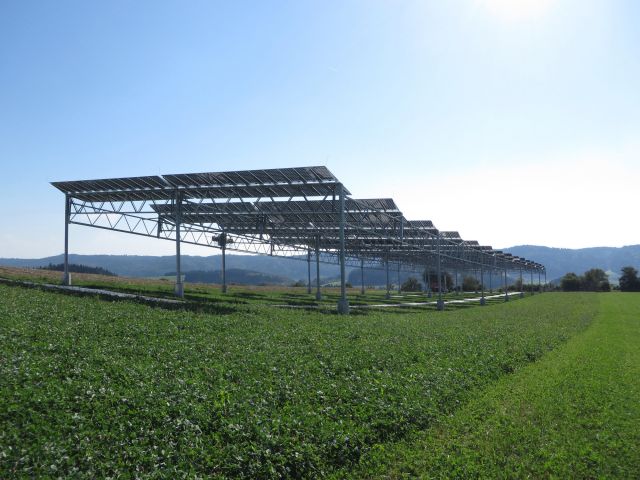 The APV system has an installed power of 194 kWp, which covers the annual electricity demand of about 62 households. The surplus electricity is fed into the grid of the energy provider "Elektrizitätswerke Schönau". So-called "bifacial PV modules" from the German module company SolarWorld are used in the APV system. These modules not only convert the solar energy incident on the front side of the modules but also the reflected ambient solar energy incident on the rear into electricity. This produces a higher energy yield per unit area and provides a more homogeneous light distribution on the crops growing underneath the APV system. “The agricultural sector is faced with the challenge of the largely expanding renewable energy sector and with managing the competitive interests of farming and energy production,” says Stephan Schindele, project head at Fraunhofer ISE. “In this context, agrophotovoltaics can serve as a trend-setting solution for the future."

A special supporting structure was developed together with the Austrian solar technology manufacturer Hilber Solar. The support structure was designed to fit the specific requirements on the premises. Due to its modular construction, the structure can be flexibly adapted for other installation sites with minimum expenditure. "We are looking forward to the results of the practical experience with the APV pilot system," says Thomas Schmid of the Demeter farm community "Hofgemeinschaft Heggelbach." "For us, it is important that the system is simple to operate and that the crop yield from underneath the APV system is at least 80 percent of that from the reference crop.” The crops under the APV system in Heggelbach are to be harvested in the summers of 2017 and 2018. After two years’ experience, the results from the different yields will be analyzed and published in a final report.
The Project "Agrophotovoltaics – Resource-Efficient Land Use” (APV-Resola) and its Partners:

The project "APV-Resola" is sponsored by the German Federal Ministry for Education and Research (BMBF) and FONA (Research for Sustainable Development). It follows the Living Lab approach that is based on an inter- and trans-disciplinary cooperation, integrating both potential users of new technologies and the general public in the innovation process. "APV-Resola" is a cooperative project between partners from the agricultural, scientific, technical sectors and local inhabitants:

Fraunhofer ISE is project head and is responsible for the technical and energy economics-related aspects. The Faculty for Agricultural Sciences at the University of Hohenheim carries out the agricultural research and ecological analysis. The Institute for Technical Assessment and System Analysis (ITAS) of the Karlsruhe Institute for Technology (KIT) is responsible for the concept and realization of the Living Lab approach. The surplus electricity is fed into the grid of the electricity supplier EWS Schönau. BayWa r. e. is in charge of the planning and maintenance of the APV system. The Demeter farm community “Hofgemeinschaft Heggelbach” has provided the land for the APV pilot system and uses the electricity produced by the system for its own consumption. The Regional Association of Lake Constance-Upper Swabia supports the project on the regional and communal level.