Augsburg/PhG/KPP – To reach temperatures closely above absolute zero at −273.16 °C the demagnetization of magnetic materials under adiabatic, i.e., thermally insulated, conditions is utilized. Up to now, diluted magnetic salts have been used for this purpose. Researchers from Augsburg, Göttingen, Kyoto and Iowa State University report in „Science Advances“ on the discovery of a new metallic compound with super-heavy electrons, whose cooling efficiency significantly beats that of currently used paramagnetic salts.

Fundamental research often requires very low temperatures, e.g. to investigate novel quantum effects in matter or to operate highly sensitive particle detectors. Usually the very rare 3-He isotope is utilized for cooling. It exhibits the lowest boiling point of matter but its price is extraordinary high. Over the last decade it increased more than tenfold. 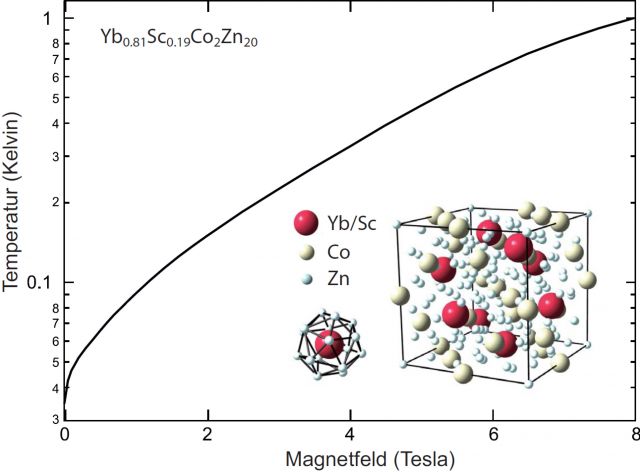 Temperature evolution of an Yb0.81Sc0.19Co2Zn20 single crystal during the reduction of a magnetic field from 8 to 0 Tesla. © University of Augsburg, IFP/EP VI

The adiabatic demagnetization method is a well-priced and uncomplicated alternative for using 3-He gas. It utilizes magnetic salts whose moments interact so weakly without magnetic field, that they are randomly oriented and order themselves only at very low temperatures. In a moderately large magnetic field the moments are aligned already at enhanced temperature. The entropy is a measure of the degree of disorder or misalignment of the moments. For cooling, the moments are therefore first aligned in a field, to reduce their entropy. Subsequently, the magnetic field is decreased to zero under adiabatic conditions that is without heat exchange to the environment. Because entropy remains constant during this processes, the material can only keep its low entropy if it cools down to very low temperatures.

Commercial adiabatic demagnetization uses paramagnetic salts. However, their thermal conductivity is so bad, that a network of metal wires has to be introduced to them, which significantly reduces the efficiency of the cooling substance per volume. Consequently, the physicists from Augsburg University together with collaborators from Göttingen University, Kyoto University and the Iowa State University intended to develop an alternative cooling substance with improved thermal conductivity. The new synthesized compound (Yb1-xScx)Co2Zn20 has the potential to significantly improve adiabatic demagnetization cooling.

Upon cooling a metal with magnetic moments, typically either ordering of the moments occurs or the moments are getting invalid due to their screening by the conduction electrons. In both cases the entropy is strongly reduced already at elevated temperatures preventing adiabatic demagnetization cooling to very low temperatures. “Aim of our research has been to avoid both effects simultaneously. If successful, it would enable effective cooling by a magnetic metal”, says Prof. Dr. Philipp Gegenwart, leader of the project at Augsburg University.

The newly discovered (Yb1-xScx)Co2Zn20 fulfills all requirements for the desired properties. As shown in the attached sketch of its structure (inset), the magnetic Yb moments are surrounded by cages from Zn atoms. This structural arrangement is crucial. On the one hand, it hinders the screening of the Yb moments by the Co conduction electrons, on the other hand it also impedes the formation of long-range order. Consequently, the weak interaction of Yb moments and their environment leads to the formation of super-heavy electrons at low temperatures. A small dilution of the Yb atoms by non-magnetic Sc tunes the onset of magnetic order to exact zero temperature. Such a “quantum critical point” in principle allows for cooling down to absolute zero.

The data published in „Science Advances“ indicate that the new compound, developed by Gegenwart and his international team, cools very strongly during adiabatic demagnetization – even below the lowest measureable temperature 0.03 K of the used setup. Cooling efficiency and thermal conductivity of the new material are significantly better compared to that of magnetic salts evidencing its suitability for improving current low-temperature cooling devices.