The Fraunhofer Institute for Solar Energy Systems ISE and teamtechnik, an international leader in production technology, report that it is now possible to connect high efficiency solar cells using electrically conductive adhesives in series production. The results of the joint research project »KleVer« show that the adhesive technology is ready for the market and can be used as an alternative to the widespread soft soldering interconnection technology. Due to the much lower process temperatures of this technology compared to soldering, temperature-sensitive high efficiency solar cells can be connected using adhesives in a gentle and material-saving process.

In industrial production, the throughput is only slightly lower than with soldering. The reliability of the adhesive connection was confirmed in tests carried out in a climate chamber. 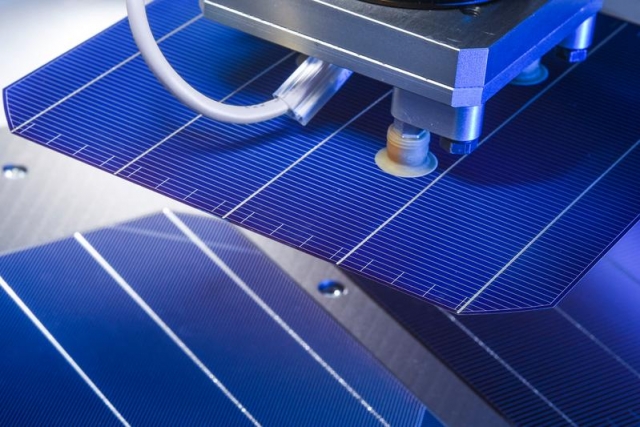 Solar cells with three, four or five busbars can be interconnected in the adhesive stringer. © Fraunhofer ISE

»In the last few years, we were able to greatly expand our expertise in connecting solar cells using electrically conductive adhesives and test this process on the laboratory scale. With the stringer unit, we were then able to further optimize the lead-free interconnection technology on the industrial scale,« explains Dr. Achim Kraft, project manager and team head of Interconnection Technologies at Fraunhofer ISE. Axel Riethmüller, project manager and Chief Operating Officer of teamtechnik, is also pleased: »As manufacturer of high performance stringers, we are proud to hold a front position in connecting technology for temperature-sensitive heterojunction solar cells on an industrial scale through the development of this unit. We already have first orders coming in for the new stringers using this adhesive technique. This would not have been possible without the joint project with Fraunhofer ISE.«

Within the »KleVer« project, a stringer with an adhesive unit was successfully put in operation and tested. On this unit, it was demonstrated that solar cells as full or half-cells with three, four or five busbars could be connected using electrically conductive adhesives at a throughput of ca. 1600 cells per hour. The power of the heterojunction modules manufactured up to now with the adhesive technology is 320 watts for a standard size of 60 cells. The process temperature of this technology remains below 180°C, avoiding damage to the hetero layers of the cells. This type of cell, which currently holds the lead in efficiency, cannot be soldered conventionally at temperatures over 200°C. Using adhesives greatly reduces the thermal and mechanical stresses in the cell, resulting in lower material tension. Therefore, the danger of micro cracks and breakage occurring is also reduced. The cycle time for cell interconnection in the teamtechnik stringer is less than 2.3 seconds and is primarily determined by the hardening time of the adhesive material used.

The »KleVer« project was financially supported by the German Federal Ministry for Economic Affairs and Energy BMWi.

The teamtechnik Maschinen und Anlagen Gmbh is one of the international market leaders for innovative production technology, assembly and functional test systems. The company, based in Freiberg, Germany, focuses on developing custom automation solutions for the automative, solar and medical technology, in which it is a recognized technology leader. Founded in 1976, teamtechnik now has production sites in Germany, Poland, China and in the United States. With over 1000 employees worldwide, the systems manufacturer achieves a turnover of €170 million.