Physicists from the University of Würzburg have designed a light source that emits photon pairs. Two-photon sources are particularly well suited for tap-proof data encryption. The experiment's key ingredients: a semiconductor crystal and some sticky tape. So-called monolayers are at the heart of the research activities. These "super materials" (as the prestigious science magazine "Nature" puts it) have been surrounded by a virtual hype in the past ten years. This is because they show great promise to revolutionise many areas of physics.

In physics, the term monolayer refers to solid materials of minimum thickness. Occasionally, it is only a single layer of atoms thick; in crystals it can be three or more layers. Experts also speak of two-dimensional materials. In this form, they frequently exhibit unexpected properties that make them interesting for research. The so-called transition metal dichalcogenides (TMDC) are particularly promising. They behave like semiconductors and can be used to manufacture ultra-small and energy-efficient chips, for example.

Moreover, TMDCs are capable of generating light when supplied with energy. Dr. Christian Schneider, Professor Sven Höfling and their research team from the Chair of Technical Physics of the Julius-Maximilians-Universität Würzburg (JMU) in Bavaria, Germany, have harnessed exactly this effect for their experiments. 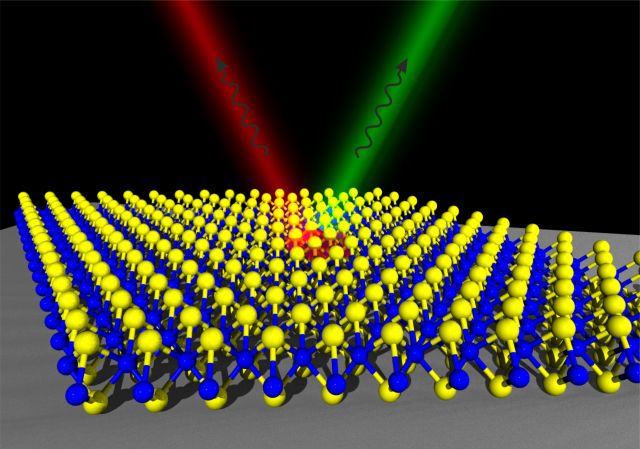 Artistic representation of a two-photon source: The monolayer (below) emits exactly two photons of different frequencies under suitable conditions. They are depicted in red and green. (Picture: Karol Winkler)

First, a monolayer was produced using a simple method. This usually involves a piece of sticky tape to peel a multi-layer film from a TMDC crystal in a first step. Using the same procedure, thinner and thinner layers can be stripped from this film. This process is repeated until the material on the tape is only one layer thick.

The researchers then cooled this monolayer down to a temperature of just above absolute zero and excited it with a laser. This causes the monolayer to emit single protons under specific conditions. "We were now able to show that a specific type of excitement produces not one but exactly two photons," Schneider explains. "The light particles are generated in pairs so to speak."

Such two-photon sources are interesting for the following reason: They can be used to transfer information 100% tap-proof. For this purpose, the light particles are entangled with each other – a quantum mechanical process in which their state is interwoven. The state of the first photon then has a direct impact on that of the second photon, regardless of the distance between the two. This fact can be used to encrypt communication channels.

In a second study, the JMU scientists demonstrated another application option of the exotic monolayers. For this purpose, they mounted a monolayer between two mirrors and again stimulated it with a laser. The radiation excited the TMDC plate to a level that it began to emit photons itself. These were reflected back to the plate by the mirrors where they excited atoms themselves to create new photons.

"We call this process strong coupling," Schneider explains. The light particles are cloned during this process in a manner of speaking. "Light and matter hybridise, forming new quasi particles in the process: the exciton polaritons," the physicist says. For the first time, it has now been possible to detect these polaritons at room temperature in atomic monolayers.

In the medium run, this will open up interesting new applications. The "cloned" photons have similar properties to laser light. But they are manufactured in completely different ways: Ideally, the production of new light particles is self-sustaining after the initial excitation without requiring any additional energy supply. In a laser in contrast, the light-producing material has to be excited energetically from the outside on a permanent basis. This makes the new light source highly energy-efficient. Moreover, it is excellently suited to study certain quantum effects.

In spring 2016, Christian Schneider received one of the coveted ERC Starting Grants of the European Research Council. The European Union thus funds his work on transition metal dichalcogenides with 1.5 million euros in total. The two studies published in the prestigious science journal "Nature Communication" are the first results of the ERC project.

The publications in Nature Communications

Dr. Christian Schneider, Chair of Technical Physics, JMU, Phone +49 931 31-88021, This email address is being protected from spambots. You need JavaScript enabled to view it.

Discuss this article
Log in to comment
Posts in discussion: Novel light sources made of 2D materials