Miniaturized connected systems and outstanding business contacts: forming networks on both technical and business level was one of the key features of COMPAMED 2016, the international trade fair for suppliers and manufacturers of medical technologies. This trend was visible at and enhanced by the joint trade fair booth of the IVAM Microtechnology Network in hall 8a, the accompanying presentation forum and numerous B2B meetings between companies from Germany and Japan.

The trend towards digitalization and networking was omnipresent at the world's largest medical trade fair MEDICA / COMPAMED, which took place November 14-17, 2016 at Düsseldorf fair grounds in Germany. In Hall 15 of MEDICA, manufacturers presented wearable systems, which facilitate medical diagnostics as well as health and fitness monitoring. The annexed COMPAMED brought together suppliers of components and groundbreaking technologies that wearables and other systems need in order to work. These include sensors, actuators, printed electronics or high-tech textiles. About fifty suppliers of key drivers for the advancement of medical technology exhibited on the Product Market "High-tech for Medical Devices" of the IVAM Microtechnology Network. 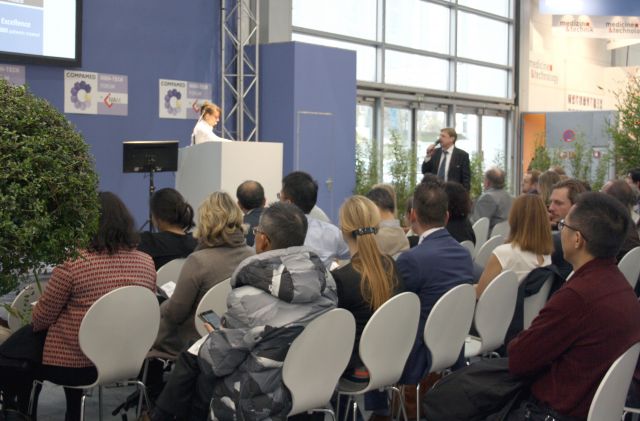 In addition to the components for wearables, the exhibits at the IVAM Product Market included intelligent implants, organs-on-a-chip – microfluidic systems lined with human cells that simulate the function of human organs and are intended to abolish animal testing from drug discovery – and the world's smallest digital CMOS image sensor NanEye provided by CMOSIS.

Already on the first two of four trade fair days the exhibitors at the IVAM Product Market reported exceptionally good exchanges and business contacts. Many exhibitors booked their booth for the coming year in the course of the trade fair, others directly afterwards so that almost half of the stand space available for 2017 is already occupied.

In addition to the business contacts at their exhibition stands, the exhibitors were able to establish and cultivate network contacts in the business lounge of the IVAM joint booth and in the environment of the COMPAMED HIGH-TECH forum organized by IVAM. The forum in hall 8a, on which the exhibitors described their innovations to the specialized audience on all four days, also illustrated the trend towards digitalization and achieved a very good response. A total of 1,325 visitors attended the 52 presentations at the COMPAMED HIGH-TECH Forum. The sessions "Smart Sensor Solutions" and "Printed Electronics" as well as the simultaneously interpreted Japan session were particularly popular. 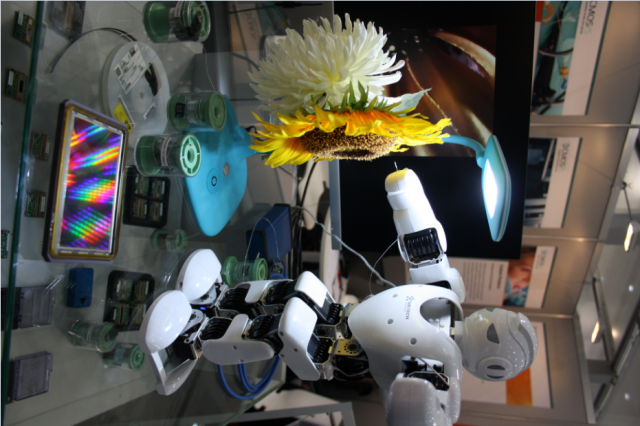 The robot moves the world’s smallest CMOS image sensor made by CMOSIS (compared to the world’s largest image sensor in the foreground). IVAM/CMOSIS
IVAM had already prepared international networking between European and Japanese companies in the run-up to the fair. During the trade fair multiple collaborations were initiated in about 70 arranged business meetings between COMPAMED exhibitors and enterprises from Fukushima Prefecture. These provided some good links for future joint projects, as many of the participants confirmed after their meetings.

The video documentation "Digitalization: Networked sensor technology at COMPAMED 2016" which has been filmed at the IVAM Product Market, again emphasizes the topic of connected medical technology. In the documentation exhibitors explain in which medical applications portable sensors and electronics are being used, how electronics are integrated into textiles and what the challenges in the detection and treatment of dementia are. The documentation produced on behalf of the trade fair organizers can be accessed on the COMPAMED website.

Information on the IVAM Product Market „High-tech for Medical Devices“ at COMPAMED 2017 are available online at http://www.ivam.de/events/compamed_2017 and from trade fair manager Ms. Orkide Karasu (+49 231 9742 7086, This email address is being protected from spambots. You need JavaScript enabled to view it.).