With data transfer rates of 10 gigabits a second and a latency of just one millisecond, the 5G wireless communications standard is creating the conditions required for the tactile internet. This in turn will open up the door to new industry, transportation and medical applications. Fraunhofer researchers work on the underlying technology and have developed practical concepts to solve one of the most challenging problems – high-speed low-latency data transfer that is also entirely reliable. The new concepts and technologies will be on show at Hannover Messe 2017.

Developing and establishing the new 5G wireless communications standard is one of the most ambitious projects of our time. Several Fraunhofer Institutes are feverishly working to lay the practical foundations for the new technology. A glance at the performance data for 5G shows just how ambitious the task is.

Successor to the current 4G wireless communications standard LTE, 5G is expected to achieve a data transfer rate of 10 gigabits a second, making it 30 times faster than LTE-based systems. Even more decisive is the latency: the Fraunhofer researchers are aiming for an ultralow latency of no more than one millisecond. What this means is that a machine controlled via 5G would respond so fast to commands that the person operating it would no longer perceive or realize any delay. Experts refer to this as the tactile internet, where all such devices or machines respond in real time. However, in addition to transfer speeds and latency, a special attention must be attached to reliability. When it comes to teleoperation or controlling traffic, the transfer of data must be entirely reliable and secure. Today, transmitting data wirelessly is still considerably more prone to glitches than sending it through shielded fiber optic cables. Wireless transmission may use versatile, adjustable antennas to help ensure the wireless signal is sent toward the receiver. Optimum signal processing and choosing certain frequencies that make use of reflections in buildings also help stabilize the flow of data. 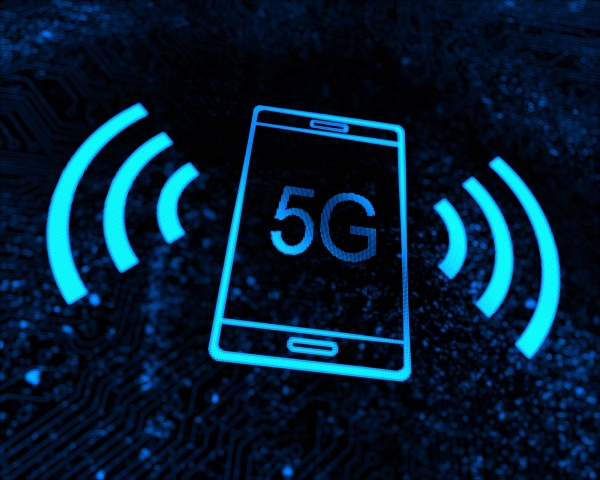 The 5G wireless communications standard is a key technology for Industrie 4.0.

Despite the considerable technological challenges, the Fraunhofer researchers are confident that the first 5G products and solutions will soon be available. “We’ve already shown in the lab that it’s possible to transfer data at 10 gigabits a second with a latency of 1 millisecond and with absolute reliability. And we are ready to present solutions that can easily be applied to products in in some interesting application areas,” says Professor Slawomir Stanczak, co-head of the Wireless Communications and Networks department at the Fraunhofer Institute for Telecommunications, Heinrich Hertz Institute, HHI. One area in which 5G will unleash its vast potential is Industrie 4.0. Here, ultrafast wireless connections would allow robots to be reliably controlled from afar as though their operators were standing next to them directing their movements with a joystick and buttons.

This spring will see the launch of the joint IC4F (Industrial Communication for Factories) project. Fraunhofer HHI is involved in the project and will be presenting details at Hannover Messe (Hall 2, Booth C16/C22) from April 24 to 28. Together with industry partners, researchers from two Fraunhofer Institutes are developing a reliable communications and computing infrastructure capable of transmitting data in real time. Here again, 5G has a major role to play. The project will receive over 10 million euros in funding from the German Federal Ministry for Economic Affairs and Energy (BMWi) and is part of the “PAiCE (Platforms | Additive Manufacturing | Imaging | Communication | Engineering) – digital technologies for industry” technology program.

Signal and information processing and learning at nodal points

Another important role is played by “edge computing,” which ensures that the information, generated by sensors for instance, is pre-filtered at the local nodal points before being transmitted over the network. What’s more, in edge computing certain functions are performed locally to keep latencies for time-sensitive tasks as low as possible. A way to further optimize data transfer is to use cognitive mechanisms at the level of network nodes. Transmission and receiving modules use intelligent algorithms and dynamic learning software to detect faults in advance and respond accordingly. “Let’s say a fork-lift truck in a factory drives past a machine and disrupts the transmission path. The system knows this in advance and either reroutes the transmission of data or initiates a timely response,” explains Stanczak.

In a bid to establish the 5G standard on a European scale, the Fraunhofer experts are also involved in other projects such as FANTASTIC-5G. The goal here is to develop a flexible, universal and scalable interface for 5G wireless communication networks. The Fraunhofer Institute for Telecommunications, Heinrich-Hertz-Institut, HHI is working with cooperation partners from the industry, including Intel, Nokia, Huawei and Samsung, and the project is receiving funding of eight million euros from the European Union.