Researchers supported by the Swiss National Science Foundation have set up a free and accessible integrated database of legal cases involving international economic law. Their work represents an important milestone for research and practice.

The number of legal agreements and disputes is increasing rapidly. Analysing them using conventional scientific methods has become all but impossible, and legal academia is now turning to big data for answers. With the support of the Swiss National Science Foundation (SNSF), IHEID researchers Joost Pauwelyn and Wolfgang Alschner (now at the University of Ottawa) have set up a database of economic law cases. The database currently comprises 15,000 judicial decisions and further texts in a form that is suitable for machine processing. "This is the first publicly accessible and free database of its kind," says Wolfgang Alschner. 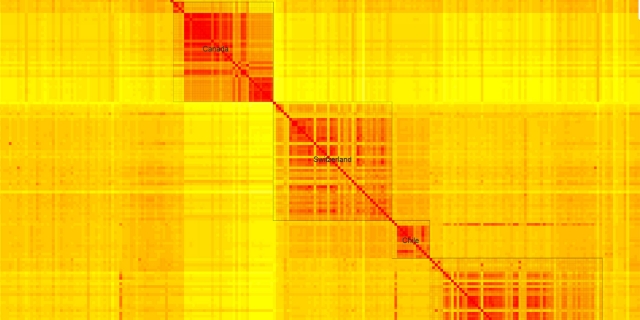 Computer science students from the Technical University of Munich took care of the technical side, while the content of the database was derived from sources such as the World Trade Organisation's collection of economic disputes and the International Centre for Settlement of Investment Disputes.

Besides setting up the database of disputes, the research team is also conducting big data analyses on the underlying international treaties. Wolfgang Alschner and his colleague Dmitriy Skougarevskiy have been using special software to compare treaty texts since 2015. A user-friendly beta version of the Mapping Treaties website, that is tailored to the needs of research and practice, is expected to go live later this year: "Legal practitioners will be interested in seeing how international treaties have evolved over time. This will help them to identify treaties that no longer conform with today's practices and therefore need renegotiating," says Alschner.

He and his colleagues are already working on a follow-up project involving the database: in collaboration with governments, they plan to process all additional information about already signed trade agreements: "The aim is to help developing countries negotiate better agreements." This highlights that digitalisation can be very useful to legal practitioners, but it cannot replace them: "Weaving insights into texts, while taking into account future developments, is a task that only the practitioners can do."

But the researchers aim to take the project beyond database construction. They hope it will encourage legal scholars to use computer-assisted methods more frequently. "These methods are often quite well known and computer linguists are already using them to analyse text," Alschner says. Law researchers, however, are hardly using them, even though they are confronted with ever-increasing amounts of text (*).

"Data-driven legal research can provide us with answers to completely new questions which couldn't be studied empirically in the past. For example, the fragmentation of international law or similarities between different legal domains," says Alschner. He envisages many more ways in which legal researchers could make use of Big Data: "We could back up abstract concepts with empirical data or develop novel theories based on new insights." Data-driven analysis thus does not replace theory-driven research and critical thinking.

E-mail: This email address is being protected from spambots. You need JavaScript enabled to view it.

E-mail: This email address is being protected from spambots. You need JavaScript enabled to view it.