From June 26 to 29, the laser community met again at the LASER World of PHOTONICS in Munich. The Fraunhofer Institute for Laser Technology ILT was there with more than 50 exhibits from the various fields of applied laser technology and beam-source development: This year the spectrum ranged from diode and fiber lasers to new measurement technology all the way to complete machines for additive processes or even laser systems for space.

The opening of the LASER fair is usually an occasion to draw attention to new trends. This year, Peter Leibinger of the TRUMPF Group spoke about opportunities offered by quantum technology for the laser sector. 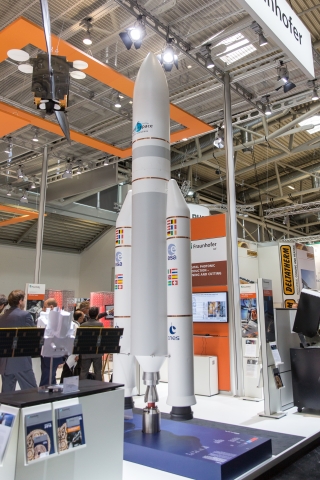 Eye-catcher at this year's LASER World of PHOTONICS was a model of the Ariane 5 rocket which will put the MERLIN satellite into space. A loan from the DLR e.V., Cologne. Fraunhofer ILT, Aachen, Germany / Klaus D.Wolf

And while research programs from the Federal Ministries and the EU are still in the foreground, industrial applications are expected in two to three years. In addition to promising advances in communication technology, quantum measurement technology will also generate significant sales.

New platforms for lasers ready for use in space

High-precise laser-based measurement technology was one of the Highlights at the Fraunhofer ILT stand. A six-meter long Ariane 5 rocket model symbolized the MERLIN mission. The MERLIN (Methane Remote Sensing LIDAR mission) small satellite is to be transported into space in 2021 from Kourou, French Guiana, to map the methane in the Earth's atmosphere. The core of the satellite is a LIDAR system, which sends light pulses into the atmosphere and determines the methane concentration from the backscattered light.

The Fraunhofer ILT experts have been working with partners such as DLR, Airbus Defence and Space, TESAT Spacecom or ESA for years. With the new FutureLaser system FULAS, the Aachen-based researchers are thinking beyond individual projects: They have built up a whole technology platform.
Beside space-qualified components, an own construction technology has been developed and validated for FULAS. All the essential adjustment steps are carried out with manually guided robots in the Pick & Align process.

What do paper rollers, brake discs on a car and hydraulic cylinders have in common? They all have to be coated. Until now, this usually happens with hard chrome plating or thermal spraying.

A team of Fraunhofer ILT and RWTH Aachen University has developed an alternative laser process: Not only is the extreme high-speed Laser Material Deposition (EHLA) 100 to 250 times faster than conventional laser cladding, but it is also environmentally friendly and gentle on the health as it does not require chromium (VI). 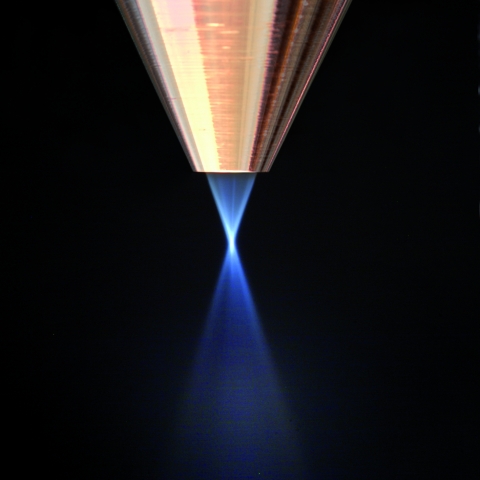 In the case of the extreme high-speed Laser Material Deposition (EHLA), the powder is melted over the surface and then flows onto the workpiece surface. Fraunhofer ILT, Aachen, Germany.

The trick with EHLA is that the powder is melted before it hits the surface. The molten material bonds materially with the base material so it cannot flake off, in contrast to the hard chrome layer.

Shortly before the LASER fair, the EHLA procedure had been honored with the Joseph von Fraunhofer Prize. Now it is going into the implementation phase: A first large-scale plant is at IHC Vremac Cylinders B.V., in Apeldoorn in the Netherlands.

Andres Veldman, Manager Engineering at IHC, is delighted: “The process is significantly faster and achieves a significant higher quality than high-velocity oxygen fuel spraying, the so-called HVOF process. In addition, the cost of post-processing is much lower compared to all other technologies.”

Reducing the costs for Additive Manufacturing

Additive manufacturing processes, such as Laser Metal Deposition or 3D printing with metal powders, are already used on an industrial scale. However, not every potential user has orders that justify an investment in the high six-digit range.

Small companies have many ideas about what you can do with the technology. This is the starting point for a low-cost system from Aachen, with production costs many times lower than for conventional systems. “We want to bring Additive Manufacturing to SMEs”, explains Professor Johannes Henrich Schleifenbaum from the newly established chair Digital Additive Production DAP at the Faculty of Mechanical Engineering at RWTH Aachen University. “In addition to this, we can offer the necessary training.”

The training seminar at Fraunhofer ILT usually takes two to five days, then the device can be fully utilized with various metal powders. The four-axis system includes, in addition to a diode laser with 140 W power, a shielding gas device and an open-source control software.

The interest at the show was great: Both small machine and tool builders asked about it as did experienced users who wanted to qualify new materials using the low-cost system.

Thanks to more than 32,000 visitors and almost 1,300 exhibitors, the LASER World of PHOTONICS has set new records. The atmosphere at the fair was correspondingly positive, and the fair was a great success for the laser specialists of Fraunhofer ILT.

They were able to gain many new ideas and contacts thanks to their wide range of topics –from laser processing in lightweight construction to ultrashort pulse processes to process control and 3D bioprinting. With the latter process, for example, elastic support scaffolds for artificial blood vessels can be produced stereolithographically from new non-toxic photoresists.