In its original version, STED microscopy achieved a resolution of 20 to 30 nanometers (millionths of a millimeter) and was thus around ten times sharper than the light microscopes available up to that point. In 2016, Hell and his coworkers were able to further increase the resolution tenfold through a new method called MINFLUX nanoscopy. In that new approach, they combined an element from the STED principle with one from another light microscopic technique, PALM/STORM, and thus achieved a resolution of just a few nanometers for the first time. MINFLUX can truly make fluorescent molecules visible on molecular scales – it does not get any sharper. 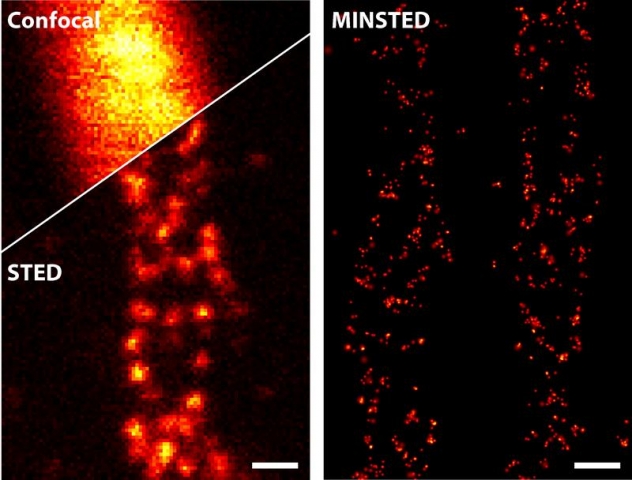 Hell was convinced that MINFLUX would not remain the only molecular resolution method, but rather would represent the first member of a new family of techniques with this level of detail. With MINSTED, he and his coworkers are now showing this to be true. As the name suggests, MINSTED relies on the original STED principle even more than MINFLUX. Elaborating on this, Michael Weber, a PhD student in Hell’s laboratory and one of the developers of MINSTED, says: “This has advantages. Like MINFLUX, it achieves molecular resolution, but the background noise is lower. In addition, the resolution can now be adjusted almost continuously from 200 nanometers down to the molecular size – 1 nanometer.”

With MINSTED, Hell is building on his breakthrough with STED more than 20 years ago and is extracting the full potential from this concept. “Microscopy on the molecular scale is here to stay. It is to be expected that MINSTED and MINFLUX will become widely used in the life sciences,” says the physicist.

Switching the fluorescence of molecules on and off

STED achieved what was previously unattainable, separately detecting molecules less than 200 nanometers apart, with a trick: Neighboring fluorescent features or molecules are switched on and off one after the other. To do this, a laser beam that excites the molecules is immediately followed by a second one, the so-called STED beam, which prevents the molecules from fluorescing. The STED beam, however, has a ‘hole’ in the middle. In other words, it is donut-shaped. Only the molecules in the middle of this donut beam can fluoresce. Thus, one always knows where the emitting molecules are. In practice, STED does not achieve molecular resolution because the donut-shaped fluorescence inhibition beam cannot be made so strong that only a single molecule can fit into the hole.

Prof. Dr. Stefan W. Hell
Department of NanoBiophotonics
phone: +49 551 201-2500
e-mail: This email address is being protected from spambots. You need JavaScript enabled to view it.