Now researchers from the Max Planck Institute for the Structure and Dynamics of Matter (MPSD) in Hamburg explore how symmetrically coupled light and matter produce a new combined state of light and electrons – a state which could be utilized in the design of new materials. Their comment has been published in Nature Materials. 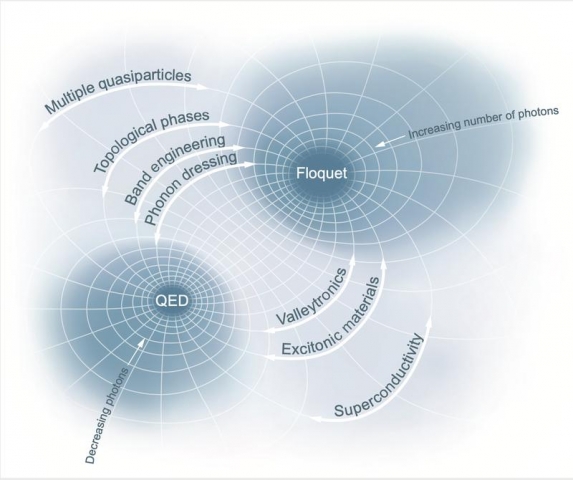 Photons in a cavity can be equipped with particular properties to control the resulting light-matter hybrid states and could be specifically designed to break specific symmetries. Umberto de Giovannini / Hannes Hübener, MPSD

While light by itself is well understood from the classical and quantum perspectives, the effects that arise from the interaction of light and matter have led to a vast field of materials research leading to many technological applications, such as solar cells for example, but are also still relevant in the area of fundamental and theoretical research. Until now, the role of the symmetries of light have been largely viewed as simply breaking the symmetry of electrons in the crystal. However, recent works utilizing intense lasers have refocused attention on the mutual effect of light polarization and the crystal. A particularly important symmetry is the ability of light to attain chirality, i.e. a well-defined handedness of its polarization.

In their comment, Hübener et al discuss the scope of this emerging view of light-matter interaction and explore its perspective for new approaches to materials design. This has implications especially for quantum materials -- materials with properties that are determined by the effects of quantum mechanics on a macroscopic scale. These emergent properties can yield new functionalities and are considered as a route towards engineering 'materials properties on demand’. The two main players in the new paradigm of materials design facilitated by light discussed here are electrons and photons. The researchers show that some characteristics of their combined quantum behavior can be inferred even from how they dynamically interact when light is considered as a classical (non-quantum) field.

The new approach to materials design discussed in this article utilizes an intriguing phenomenon: The effects of treating light on the same footing as electrons become even more striking when the light is confined in an optical resonator or cavity. In such systems, where light is reflected back and forth on a very small scale so that only well-defined modes of the field can be sustained, the quantum structure of the electromagnetic field is exposed and it has to be described in terms of single light particles (photons). These devices can be thought of as providing photons in a can, a closed container with a particular type of photons.

The properties of the photons inside the can are determined by its size, shape and structure of the walls. Such cavities have long been used to control and manipulate the electromagnetic field, most famously for making lasers. However, they are increasingly relevant in materials science. This is because a photon trapped inside a cavity together with a material interacts with its electronic and, indeed, crystal structure on a quantum level, resulting in strong interaction and the formation of light-matter hybrid states which can generate novel properties.

Such states are determined by the properties of both the electrons and of the photons. This opens up the exciting possibility that the photons in the cavity can be equipped with particular properties to control the resulting hybrid states. In fact, they could be specifically designed to break specific symmetries in the material. As mentioned above, the manipulation of time-reversal symmetry can have a particularly strong impact on the properties of quantum materials.

Hannes Hübener, lead author: This email address is being protected from spambots. You need JavaScript enabled to view it.