It is a well-known school experiment: When a voltage is applied between two electrodes inserted in water, molecular hydrogen and oxygen are produced. To further the industrial use of this process, it is indispensable to make water splitting as energy-efficient as possible. In addition to the material of the electrode, its surface quality is a crucial aspect for the splitting efficiency. In particular, rough spots of only few nanometers - i.e. millionths of a millimeter – in size that are called reactive centers determine the electrochemical reactivity of an electrode. 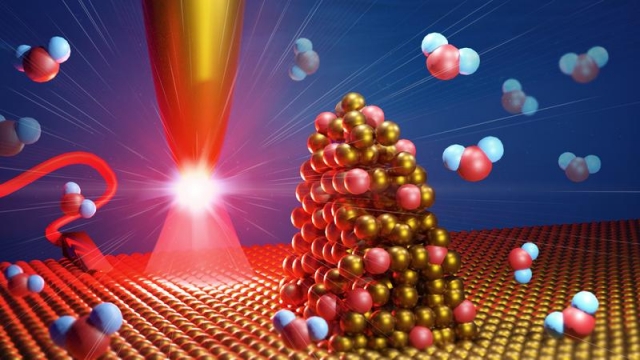 At rough areas of a catalyst surface, water is split into hydrogen and oxygen in a more energy efficient way than at smooth areas. MPI-P, License CC-BY-SA

Previous investigation methods were not accurate enough to follow chemical reactions taking place at such reactive centers on the electrode surface with sufficient spatial resolution under real operating conditions, i.e. in electrolyte solution at room temperature and with an applied voltage. A team of scientists led by Dr. Katrin Domke, independent Boehringer Ingelheim "Plus 3" group leader at the MPI-P, has now developed a new method with which the initial steps electrocatalytic water splitting on a gold surface could be studied for the first time with a spatial resolution of less than 10 nm under operating conditions.

"We were able to show experimentally that surfaces with protrusions in the nanometer range split water in a more energy efficient way than flat surfaces," says Katrin Domke. "With our images, we can follow the catalytic activity of the reactive centers during the initial steps of water splitting".

For their method, they have combined different techniques: In Raman spectroscopy, molecules are illuminated with light that they scatter. The scattered light spectrum contains information that provides a chemical fingerprint of the molecule, enabling the identification of chemical species. However, Raman spectroscopy is typically a technique that produces only very weak and, moreover, only spatially averaged signals over hundreds or thousands of nanometers.

For this reason, the researchers have combined the Raman technique with scanning tunneling microscopy: by scanning a nanometer-thin gold tip illuminated with laser light over the surface under investigation, the Raman signal is amplified by many orders of magnitude directly at the tip apex that acts like an antenna. This strong enhancement effect enables the investigation of very few molecules at a time. Furthermore, the tight focusing of the light by the tip leads to a spatial optical resolution of less than ten nanometer. The distinctive feature of the apparatus is that it can be operated under realistic electrocatalytic operating conditions.

"We were able to show that during water splitting at nanometer rough spots - i.e. a reactive centers - two different gold oxides are formed, which could represent important intermediates in the separation of the oxygen atom from the hydrogen atoms," says Domke. With their investigations, it is now possible to gain a more precise insight into the processes taking place on the nanometer scale on reactive surfaces and facilitate the design of more efficient electrocatalysts in the future, where less energy is needed to split water into hydrogen and oxygen.

The scientists have published their results in the renowned journal "Nature Communications".

Dr. Katrin F. Domke
Email: This email address is being protected from spambots. You need JavaScript enabled to view it.
Tel.: 06131 379-476

Discuss this article
Log in to comment
Posts in discussion: Water Splitting Observed on the Nanometer Scale