Many chemical processes run so fast that they are only roughly understood. To clarify these processes, a team from the Technical University of Munich (TUM) has now developed a methodology with a resolution of quintillionths of a second. The new technology stands to help better understand processes like photosynthesis and develop faster computer chips.

An important intermediary step in many chemical processes is ionization. A typical example of this is photosynthesis. The reactions take only a few femtoseconds (quadrillionths of a second) or even merely a few hundred attoseconds (quintillionths of a second). Because they run so extremely fast, only the initial and final products are known, but not the reaction paths or the intermediate products.

To observe such ultrafast processes, science needs a measurement technology that is faster than the observed process itself. So-called “pump-probe spectroscopy” makes this possible.

Here, the sample is excited using an initial laser pulse, which sets the reaction into motion. A second, time-delayed pulse queries the momentary state of the process. Multiple repetitions of the reaction with different time delays result in individual stop-motion images, which can then be compiled into a “film clip”. 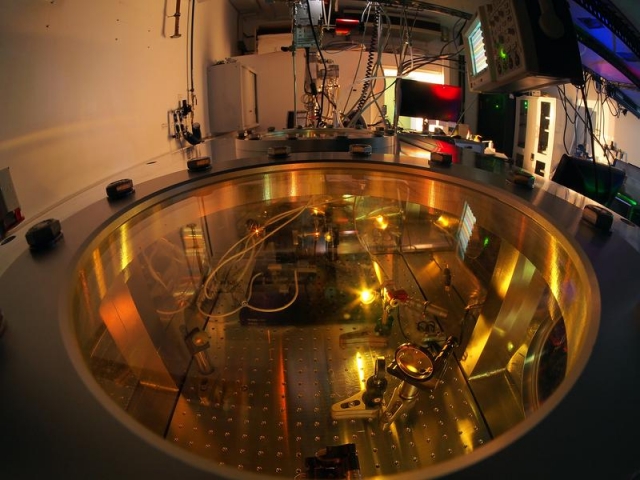 Two eyes see more than one

Now, a team of scientists headed by Birgitta Bernhardt, a former staff member at the Chair of Laser and X-ray Physics at TU Munich and meanwhile junior professor at the Institute of Applied Physics at the University of Jena, have for the first time succeeded in combining two pump-probe spectroscopy techniques using the inert gas krypton. This allowed them to shed light on the ultrafast ionization processes in a precision that has simply not been possible hitherto.

“Prior to our experiment, one could observe either which part of the exciting light was absorbed by the sample over time or measure what kind of and how many ions were created in the process,” explains Bernhardt. “We have now combined the two techniques, which allows us to observe the precise steps by which the ionization takes place, how long these intermediate products exist and what precisely the exciting laser pulse causes in the sample.”

The combination of the two measuring techniques allows the scientists not only to record the ultrafast ionization processes. Thanks to the variation in the intensity of the second, probing laser pulse, they can now, for the first time, also control and in this way also influence the ionization dynamics.

“This kind of control is a very powerful instrument,” explains Bernhardt. “If we can precisely understand and even influence fast ionization processes, we are able to learn a lot about light-driven processes like photosynthesis – especially about the initial moments in which this complex machinery is set into motion and which is hardly understood to date.”

The technology developed by Bernhardt and her colleagues is also interesting for the development of new, faster computer chips in which the ionization of silicon plays a significant role. If the ionization states of silicon can not only be sampled on such a short time scale, but can also be set – as the first experiments with krypton suggest – scientists might one day be able to use this to develop novel and even faster computer technologies.

The work is the result of a collaboration between the workgroups led by Prof. Reinhard Kienberger, who heads the Chair of Laser and X-ray Physics at TU Munich and Stephan Fritzsche, professor at the Institute of Theoretical Physics of the Friedrich Schiller University of Jena.

The research was funded by the European Research Council (ERC), the German Federal Ministry of Education and Research (BMBF), the Max Planck Society, the Max Planck Institute of Quantum Optics, the German Research Foundation (in the context of the Cluster of Excellence Munich Center for Advanced Photonics, MAP), the Alexander von Humboldt Foundation, the Carl Zeiss Foundation, the Donostia International Physics Center of the Donostia-San Sebastián University (Spain) and the workgroup Small Quantum Systems of the European XFEL in Hamburg.

https://www.tum.de/nc/en/about-tum/news/press-releases/detail/article/34499/ Link to the press release

Discuss this article
Log in to comment
Posts in discussion: Observing and Controlling Ultrafast Processes with Attosecond Resolution