Researchers at the universities of Würzburg and Frankfurt have developed a new compound for treating cancer. It destroys a protein that triggers its development.
The villain in this drama has a pretty name: Aurora – Latin for dawn. In the world of biochemistry, however, Aurora (more precisely: Aurora-A kinase) stands for a protein that causes extensive damage. There, it has been known for a long time that Aurora often causes cancer. It triggers the development of leukemias and many pediatric cancers, such as neuroblastomas.

The Web of Death: New Method to Fight Cancer with Molecular Fibers

According to the Federal Statistical Office of Germany, cancer is one of the most frequent causes of death, accounting for almost 25% of all deaths cases. Chemotherapy is often used as a treatment, but also brings side effects for healthy organs. Scientists around David Ng, group leader at the Max Planck Institute for Polymer Research, are now trying to take a completely different approach: By means of targeted and localized disruption of the cancer cells’ structure, its self-destruction mechanism can be activated. In laboratory experiments, they have already demonstrated initial successes. 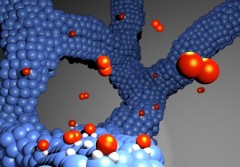 An international research team led by the University of Bern has succeeded in developing an electrocatalyst for hydrogen fuel cells which, in contrast to the catalysts commonly used today, does not require a carbon carrier and is therefore much more stable. The new process is industrially applicable and can be used to further optimize fuel cell powered vehicles without CO2 emissions.

Semiconductors made of organic materials, e.g. for light-emitting diodes (OLEDs) and solar cells, could replace or supplement silicon-based electronics in the future. The efficiency of such devices depends crucially on the quality of thin layers of such organic semiconductors. These layers are created by coating or printing “inks” that contain the material. Researchers at the Max Planck Institute for Polymer Research (MPI-P) have developed a computer model that predicts the quality of such layers as a function of processing conditions, such as the drying time of the ink or the speed coating. This model aims to accelerate the time-consuming approaches for process and product optimization.