How to Construct a Protein Factory

The complexity of molecular structures in the cell is amazing. Having achieved great success in elucidating these structures in recent years, biologists are now taking on the next challenge: to find out more about how they are constructed. A joint research project between two groups from the University of Bern and ETH Zurich now provides insight into a very unusual construction process in the unicellular parasite Trypanosoma brucei.

Cells consist of a multitude of molecular structures, some of them exhibiting a staggering complexity. Ribosomes, the protein factories of the cell, belong to the biggest and most sophisticated complexes and are made up of RNA as well as a large number of proteins. They exist in every living being and are considered as one of the cellular machines that has changed the least through all stages of the evolution. But there are exceptions: In mitochondria, cellular organelles that serve as power plants, ribosomes look considerably different. 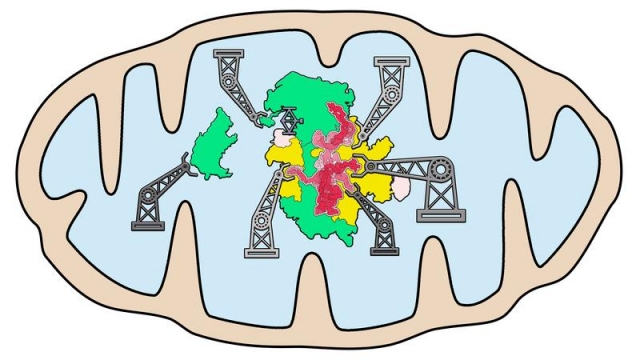 Scientists are not only interested in the structure and function of such ribosomes, but also in the “construction process“ - how do cells manage the assembly of these complex structures? And how do these construction methods differ, for different structures? It is clear that an extensive cellular machinery is needed to guarantee for a smooth assembly of all the building bricks. This cellular machinery responsible for ribosome assembly in mitochondria has not been described yet. Now, researchers from the André Schneider group of the University of Bern and the Nenad Ban group of ETH Zurich, investigated the mitochondrial ribosome assembly process using the unicellular parasite Trypanosoma brucei. They were able to follow the construction process and to identify the associated cellular machinery dedicated to assemble these mitoribosomes. Since T. brucei causes hardly treatable diseases including sleeping sickness, the results could lead to new therapies. The project was made possible by the National Center of Competence in Research "RNA & Disease", which studies the role of RNA in disease mechanisms. The findings have now been published in “Science”.

Unknown elements in the “construction business”

The parasite Trypanosoma brucei was used as a model system since its mitoribosomes are particularly complex and, therefore, likely to require many assembly steps. The researchers could follow all these steps in detail. “We have found fascinating differences”, says Moritz Niemann from the Department of Chemistry and Biochemistry of the University of Bern, co-author. In mitochondrial ribosomes RNA can be considered as the steel in reinforced concrete, whereas in other ribosomes it can be considered to play key structural role as in iron-based structures such as the Eiffel Tower. Analysis showed that the assembly of mitoribosomes in T. brucei proceeds through the formation of several assembly intermediates. It also involves a large number of proteins that form a huge adaptive scaffolding around the emerging mitoribosome that is not present in the completed structure. Martin Saurer from the Department of Biology of ETH Zurich and first author, says that many of these proteins were unknown in the “construction business”. “Cryo-electron microscopy does not only allow us to visualize known complexes but also to discover and describe an entire cellular process: the construction site and the machinery involved in assembling mitochondrial ribosomes,” he adds. Moritz Niemann was especially baffled by the enormous effort the cell is putting into this: “Up to a quarter of all proteins in the mitochondrion are components of the mitoribosomes or are required to build them.”

Since several of the assembly proteins have look-alikes in other organisms, the researchers believe that the obtained insights provide general information for better understanding ribosomal maturation in all organisms. And because all these proteins are essential for the functioning of the cell, these findings could be useful for developing therapies against T. brucei and related parasites that cause many devastating diseases in humans and animals.

«RNA & Disease – The Role of RNA Biology in Disease Mechanisms»

The NCCR «RNA & Disease – The Role of RNA Biology in Disease Mechanisms» studies a class of molecules that has long been neglected: RNA (ribonucleic acid) is pivotal for many vital processes and much more complex than initially assumed. For instance, RNA defines the conditions, in a given cell, under which a given gene is or is not activated. If any part of this process of genetic regulation breaks down or does not run smoothly, this can cause heart disease, cancer, brain disease and metabolic disorders.The NCCR brings together Swiss research groups studying different aspects of RNA biology. By researching which regulatory mechanisms are dysregulated in disease, the NCCR discovers new therapeutical targets. Leading institution is the University of Bern, with the ETH Zurich co-leading. National Centers of Compentence in Research are a research instrument of the Swiss National Science Foundation (SNSF).
https://nccr-rna-and-disease.ch/

Dr. Moritz Niemann, Department of Chemistry and Biochemistry (DCB), University of Bern
Phone +41 31 631 42 10 / This email address is being protected from spambots. You need JavaScript enabled to view it.

Prof. Dr. André Schneider, Department of Chemistry and Biochemistry (DCB), University of Bern
Tel. +41 31 631 42 53 / This email address is being protected from spambots. You need JavaScript enabled to view it.