Microbial pathogens can be diagnosed unambiguously and within just 24 hours by means of high-throughput sequencing of their genetic makeup and special bioinformatics evaluation algorithms. Fraunhofer researchers have validated this in a clinical study with sepsis patients. The researchers present the NGS diagnosis platform at Medica in Düsseldorf from November 14–17, 2016. It is estimated that in Germany alone around 150,000 people fall ill with sepsis every year; despite medical advances, between 30 and 50 percent of the patients still die of the consequences. One of the reasons for the high mortality rate: the diagnosis often comes too late for the lifesaving therapy with antibiotics that only combat the specific causative pathogen.

In general the sepsis pathogens are detected by means of so-called blood cultures in which the pathogenic organism from blood samples of the patients are cultivated in the laboratory. Here, two to five days pass before the pathogens have multiplied and a result is available.

Due to rapid progress in nucleic acid analysis, the currently available high-throughput technologies (NGS, Next-Generation Sequencing) make it possible to sequence the complete genome of organisms within just a few hours and to check them against known gene sequences. 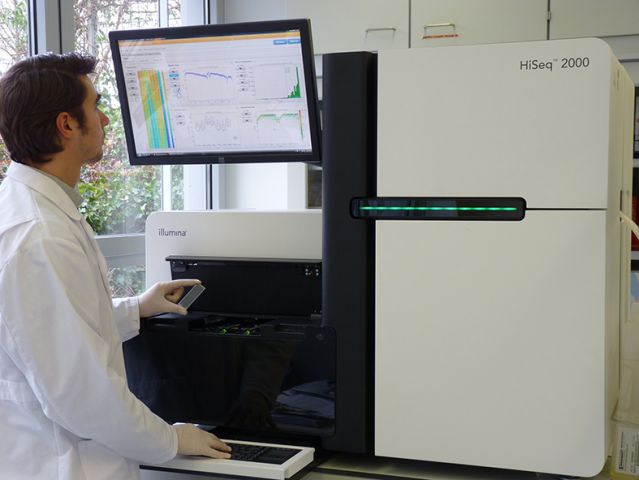 On the basis of these technologies researchers at the Fraunhofer Institute for Interfacial Engineering and Biotechnology IGB have developed an alternative diagnostic platform for sepsis. This enables them to identify bacteria, fungi or viruses directly by means of a sequence analysis of their DNA – without having to cultivate the pathogens beforehand in the laboratory. In a clinical study that the researchers carried out in cooperation with Heidelberg University Hospital, they have now validated their diagnostic method with blood samples from sepsis patients. Here, they identified the infectious microorganisms by means of the high-throughput sequencing of DNA circulating freely in the blood (CNAPS, Circulating Nucleic Acids in Plasma and Serum).

“With our next-generation sequencing diagnostic method we were able to determine within just 24 hours which pathogens the patients were infected with,” Dr. Kai Sohn, head of the “Functional Genomics” working group at Fraunhofer IGB, explains. “As a result of the direct sequencing of the DNA of a blood sample, the time-consuming step of cultivating the microorganisms in the lab is no longer necessary. In this way we can also identify those pathogens that are more difficult to grow under laboratory conditions,” says Dr. Sohn.

A further advantage: If the samples contain not only the DNA of bacteria, but also that of viruses or fungi, these are sequenced, analyzed and identified as well. “For example, in our study we were able to identify a viral pathogen as the cause of a patient’s illness. Yet the patient’s blood culture showed a negative result because here only bacteria can be detected,” the scientist explains.

The method provides both qualitative and quantitative results at the same time. “With our technology, we can recognize on the basis of the number of genome fragments which pathogens have greatly multiplied in the patient and which are already responding to the therapy,” Dr. Sohn points out. This permits the physician to immediately implement further targeted therapeutic measures instead of allowing valuable time to pass employing incorrect medication.

Over 99 percent of the DNA freely circulating in the blood plasma is of human origin – thus identifying the sepsis pathogens resembles the proverbial search for a needle in a haystack. The researchers therefore use special software programs to compare the sequenced fragments with a genome database into which they have entered publicly available DNA sequences of bacteria, fungi and viruses.

However, not every microorganism that is identified is necessarily also the cause of the sepsis. One of the greatest challenges in the evaluation of the sequencing data is therefore to assess whether the finding differs from the statistically expected result. In order to be able to answer this decisive question, Philip Stevens, the bioinformatics specialist in the team, developed a special algorithm in his doctoral thesis at the Center for Integrative Bioinformatics Vienna (CIBIV) and the Institute of Interfacial Process Engineering and Plasma Technology (IGVP) of the University of Stuttgart.

The centerpiece of the diagnostic method, for which a patent is pending, compares the sequencing results with sequenced fragments from the blood of healthy test persons. “In this way the algorithm provides us with a score with which we can assess the significance of the data and can exclude the microbial “background noise”, i.e. harmless bacteria of our skin or intestinal flora, as diagnostically relevant pathogens,” Stevens explains. The clinical study showed that the computed diagnoses correlated closely with those of the blood culture.

The resistance of bacteria to commonly used antibiotics such as methicillin, vancomycin or tetracycline is acquired via corresponding resistance genes. Therefore high-throughput sequencing makes it possible, in the same analysis, to identify both the biological species of the pathogen and its resistance genes. This also helps the physician treating the patient to set in motion a targeted therapy.

In order to further shorten the time from sample to final diagnosis, the scientists are examining how the method can be transferred to more recently developed sequencing platforms. With nanopore-based sequencing, for example, which is currently in the test phase, DNA can be sequenced in an even shorter time than previously. Thus in future the specific diagnosis of infections would be possible within a period of six to eight hours. For 2017 the Fraunhofer scientists are planning to carry out a multicenter validation study together with leading clinical partners.