In a stunning discovery, molecular biologists from the University of Konstanz and ETH Zurich have been able to demonstrate that the nascent polypeptide-associated complex (NAC) senses newly synthesized proteins upon birth inside the ribosomal tunnel. New research published in Molecular Cell on 31 July 2019 conducted by researchers from the University of Konstanz’s Collaborative Research Centre 969 “Chemical and Biological Principles of Cellular Proteostasis” shows that the nascent polypeptide-associated complex (NAC) acts as a major protein identifying and, possibly, sorting device inside the cell.

Working closely with Professor Nenad Ban, an expert for resolving ribosomal structures from ETH Zurich, the team led by Professor Elke Deuerling and Dr Martin Gamerdinger from the University of Konstanz’s Department of Biology – including co-workers Annalena Wallisch, Dr Stefan Kreft, Nadine Sachs and Renate Schlömer as well as Junior Professor Florian Stengel and doctoral researcher Carolin Sailer – has discovered that NAC inserts the N-terminal domain of its β-subunit (N-βNAC) deep into the ribosomal tunnel to sense substrates directly upon synthesis and to escort growing polypeptides to the cytosol. 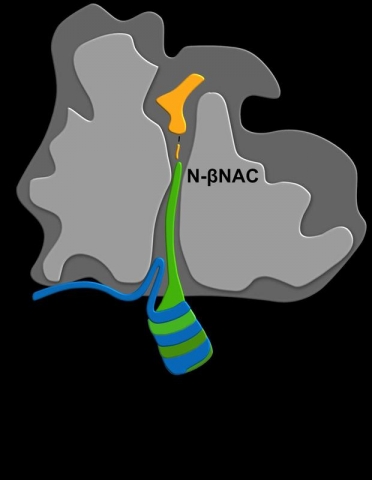 “No other factor we know does that, which is why we were so utterly surprised by our findings. Although NAC was discovered as long as 25 years ago, we are only now beginning to understand how crucial it is for proper cell function. Our study shows that, besides acting as a chaperone both on and off the ribosome, NAC is also able to recognize nascent polypeptide chains deep inside the ribosomal tunnel”, says Professor Elke Deuerling, lead author on the study and Professor of Molecular Microbiology at the University of Konstanz. “We already knew NAC to transiently interact with translating ribosomes. But we did not understand how exactly NAC interacts with the ribosome and with nascent substrates to regulate protein folding and transport to the endoplasmic reticulum (ER), which is essential for organismal viability”.

The researchers performed biochemical, genetic and structural analyses in the model system C. elegans to attain a more detailed understanding of how NAC identifies and sorts nascent polypeptide chains inside the ribosomal tunnel. “Until quite recently, we assumed that the earliest point of interaction between ribosome-associated factors such as chaperones, enzymes and transport proteins was when the nascent polypeptide chains exit the ribosomal tunnel”, explains Dr Martin Gamerdinger, first author on the study alongside Kan Kobayashi, formerly of ETH Zurich and currently an assistant professor at the University of Tokyo. “Usually, at that point, the chains have a length of about 40 amino acids. What we have discovered is that NAC binds to nascent chains as short as ten amino acids or even shorter, and it is doing it inside the tunnel. This makes NAC the very first factor to contact newly synthesized proteins. We even suspect it to be able to sense when the first two amino acids of a nascent protein connect with each other”.

As the researchers have been able to show using a combination of cryo-electron microscopy, mass spectrometry and biochemical analyses, including a series of site-specific crosslink experiments, NAC inserts the positively charged and highly flexible N-terminal domain of its β-subunit (N-βNAC) into the ribosomal tunnel, which is for the most part lined by negatively charged ribosomal RNA. “What our study demonstrates is that NAC is able to sense translation activity inside the tunnel and, more importantly, that it is able to sense the character of the proteins that are being synthesized. At least that is our current hypothesis”, says Elke Deuerling.

Once they exit the ribosomal tunnel, nascent protein chains can continue down a range of different biogenesis pathways: Some are passed on to other factors that escort these chains to their intended destinations somewhere else inside the cell. Some are modified by enzymes, others require chaperone support to attain their native structural fold. As Martin Gamerdinger comments: “If what we are assuming about the early sensing-mechanism of NAC is correct, then this complex is the single most important protein sorting mechanism that we know of. It would explain how cells manage the complex processes and reactions that take place in connection with nascent polypeptide chains once they exit the ribosomal tunnel”. Accordingly, what the researchers plan to verify next is whether the N-βNAC domain can identify the character of nascent proteins inside the ribosomal tunnel and how it prompts them to enter the correct protein biogenesis pathways.

“What we further found is that NAC acts as a molecular filter, preventing inactive ribosomes or ribosomes in the early translational stages from interacting with the translocon of the ER, i.e. with the complex that transports nascent polypeptides with a targeting signal sequence into the endoplasmic reticulum. Unregulated ribosome-translocon interactions could lead to the wrong proteins entering the endoplasmic reticulum on the one hand, and to depletion of protein factors that are in fact needed elsewhere on the other”, says Elke Deuerling. “NAC is thus responsible for making the various steps involved in protein biogenesis much more efficient and specific”.

While the N-βNAC domain seems to be responsible for sensing and possibly for sorting nascent polypeptide chains, another NAC domain, N-αNAC, interacts with the β-domain and with itself in order to regulate NAC activity on ribosomes. “This, too, is something that we did not know about before”, explains Martin Gamerdinger. “Without N-αNAC, NAC would bind too strongly to the ribosome, interfering with the essential protein translation processes taking place there. We have yet to understand how exactly this auto-inhibitory function of NAC works, but what seems clear is that N-αNAC downregulates ribosome binding”. As in vivo experiments with C. elegans clearly showed, worms expressing a NAC variant that lacks the auto-inhibition and shows enhanced ribosome binding were developmentally delayed due to reduced protein synthesis rates and impaired translation, clearly showing defects caused by NAC-ribosome misregulation.

Note to editors:
Images are available for download here: