A group of theoretical physicists headed by Oriol Romero-Isart from the Institute for Quantum Optics and Quantum Information and the University of Innsbruck observes a surprising quantum effect when short light pulses interact with matter. In the future, this effect may be used for developing a completely new type of far-field light nanoscopes.

As for many other biomedical and biotechnology disciplines, the genome scissor “CRISPR/Cas9” also opens up completely new possibilities for cancer research. Scientists of the National Center for Tumor Disease (NCT), the German Consortium for Translational Cancer Research (DKTK) and the Medical Faculty of the TU Dresden have shown that mutations that act as cancer drivers can be targeted and repaired. The most relevant mutations could therefore be diagnosed faster, improving personalized therapies.

Secure networks for the Internet of the future

Two new projects at the University of Würzburg's Institute of Computer Science receive nearly EUR 750,000 worth of funding. The institute is working to make secure and efficient networks for the Internet of the future happen.

Healthy fat tissue is essential for extended survival in the event of tumor-induced wasting syndrome (cachexia). In Nature Medicine, researchers at Helmholtz Zentrum München show that selective manipulation of an enzyme can stop unwanted metabolic processes. 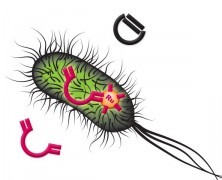 Scientists at the University of Basel, ETH Zurich, and NCCR Molecular Systems Engineering have developed an artificial metalloenzyme that catalyses a reaction inside of cells without equivalent in nature. This could be a prime example for creating new non-natural metabolic pathways inside living cells, as reported today in Nature.

Cell-compatible OLEDs for use with patients

Cytocompatibility studies of organic light-emitting diodes (OLEDs) have been carried out on cell cultures for the first time at the Fraunhofer Institute for Organic Electronics, Electron Beam and Plasma Technology FEP to test how well OLEDs are tolerated by cells. The results offer promising prospects for the use of OLEDs in the medical field, such as in light therapy. The findings will be published in a white paper entitled “Preliminary cytocompatibility studies for encapsulated OLEDs” and likewise be presented at the 4th Industry Partners Day of the Fraunhofer FEP in Dresden on September 28, 2016. 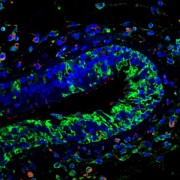 Neuherberg, August 26, 2016. In adults with a house dust mite allergy, a cascade of inflammatory signals on the surface of the airways leads to airway remodeling. This process cannot be influenced by standard cortisone therapy. Researchers at Helmholtz Zentrum München and the Technical University of Munich have reported these findings in the latest issue of the ‘Journal of Allergy and Clinical Immunology’. 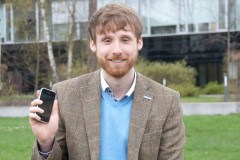 The global supply potential of the high-tech metals gallium and germanium is much greater than actual annual production levels. This is the main conclusion from Max Frenzel’s work. Frenzel, a postgraduate student at the Helmholtz Institute Freiberg for Resource Technology (HIF), which closely cooperates with the TU Bergakademie Freiberg, is one of two recipients of the Bernd Rendel Prize for Geosciences 2016. The prize, awarded by the German Research Foundation (DFG), will be presented on 28th September at the annual conference of the German Geological Society (DGGV) in Innsbruck.

Researchers image roots in the ground 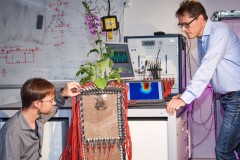 It's a familiar hazard of vacation time: While you're conspicuously absent, your colleagues in the office forget to water and fertilize the plants – often leaving behind nothing but a brownish skeleton. Whether a plant thrives or wastes away depends above all on whether its roots get enough water and nutrients. Geophysicists at the University of Bonn have now visualized such processes for the first time using electrical impedance tomography. The researchers have now published their results in the scientific journal "Biogeosciences". 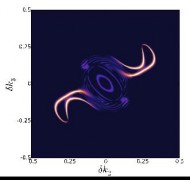 An international team of researchers has predicted the existence of several previously unknown types of quantum particles in materials. The particles — which belong to the class of particles known as fermions — can be distinguished by several intrinsic properties, such as their responses to applied magnetic and electric fields. In several cases, fermions in the interior of the material show their presence on the surface via the appearance of electron states called Fermi arcs, which link the different types of fermion states in the material's bulk.

Every atom counts in Protein structures 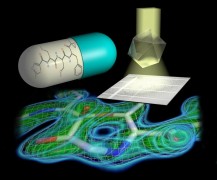 Malignant cancer cells not only proliferate faster than most body cells. They are also more dependent on the most important cellular garbage disposal unit, the proteasome, which degrades defective proteins. Therapies for some types of cancer exploit this dependence: Patients are treated with inhibitors, which block the proteasome. The ensuing pile-up of junk overwhelms the cancer cell, ultimately killing it. Scientists have now succeeded in determining the human proteasome’s 3D structure in unprecedented detail and have deciphered the mechanism by which inhibitors block the proteasome. Their results will pave the way to develop more effective proteasome inhibitors for cancer therapy.

Better Contrast Agents Based on Nanoparticles

Scientists at the University of Basel have developed nanoparticles which can serve as efficient contrast agents for magnetic resonance imaging. This new type of nanoparticles produce around ten times more contrast than common contrast agents and are responsive to specific environments. The journal Chemical Communications has published these results. 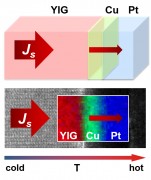 Thermoelectric effects are a fundamental building block for the conception and development of new processes for information processing. They enable to re-use waste heat obtained in different processes for the operation of respective devices and thus contribute to the establishment of more energy-efficient, ecofriendly processes. A promising representative of this effect category is the so-called spin Seebeck effect, which became prominent within recent years. This effect allows to convert waste heat into spin currents and thereby to transport energy as well as information in magnetic, electrically insulating materials.

Moisture can destroy mortar over time – for example when cracks form as a result of frost. A team of scientists at the Technical University of Munich (TUM) has found an unusual way to protect mortar from moisture: When the material is being mixed, they add a biofilm – a soft, moist substance produced by bacteria.

Oliver Lieleg usually has little to do with bricks, mortar and concrete. As a professor of biomechanics at the Institute of Medical Engineering (IMETUM) and the Department of Mechanical Engineering, he mainly deals with biopolymer-based hydrogels or, to put it bluntly, slime formed by living organisms.These include bacterial biofilms, such as dental plaque and the slimy black coating that forms in sewage pipes. “Biofilms are generally considered undesirable and harmful. They are something you want to get rid of,” says Oliver Lieleg. “I was therefore excited to find a beneficial use for them.” 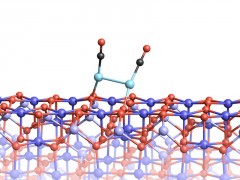 The remarkable behaviour of platinum atoms on magnetite surfaces could lead to better catalysts. Scientists at TU Wien (Vienna) can now explain how platinum atoms can form pairs with the help of carbon monoxide.

At first glance, magnetite appears to be a rather inconspicuous grey mineral. But on an atomic scale, it has remarkable properties: on magnetite, single metal atoms are held in place, or they can be made to move across the surface. Sometimes several metal atoms on magnetite form small clusters. Such phenomena can dramatically change the chemical activity of the material. Atomic processes on the magnetite surface determine how well certain metal atoms can serve as catalysts for chemical reactions.

The Exception and its Rules: Exceptional points in wave physics 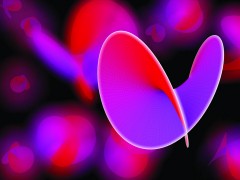 “Exceptional points” give rise to counter-intuitive physical effects. Researchers from TU Wien (Vienna) make use of these phenomena to create a novel kind of wave guide, which is now being presented in the journal “Nature”.

No matter whether it is acoustic waves, quantum matter waves or optical waves of a laser – all kinds of waves can be in different states of oscillation, corresponding to different frequencies. Calculating these frequencies is part of the tools of the trade in theoretical physics. Recently, however, a special class of systems has caught the attention of the scientific community, forcing physicists to abandon well-established rules.